The Prince William County Bar Association mourned the loss of its last living founding member with the passing of Judge Arthur Williams Sinclair. Efforts to assemble a tribute to him brought into view a picture of a man whose impact on the local legal community, and community at large, were quietly profound. 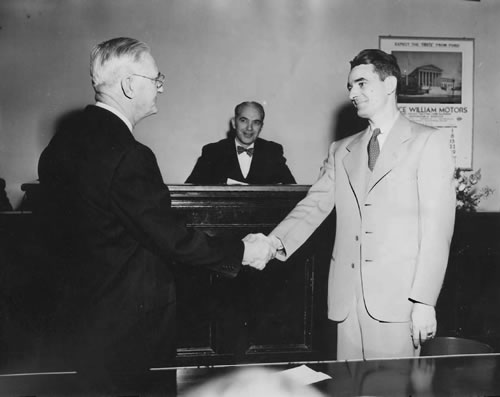 Judge Arthur W. Sinclair, right, is sworn in by his father, County Treasurer C.A. Sinclair, left, as the fourth judge to serve the then 16th Judicial Circuit, covering Alexandria and the counties of Fairfax and Prince William. Judge Paul H. Brown, background, presided. About 65 persons attended, among them, most of the lawyers of Prince William County. After the swearing in Judge Sinclair was honored at a luncheon given by the Bar Association at Stone House Inn.